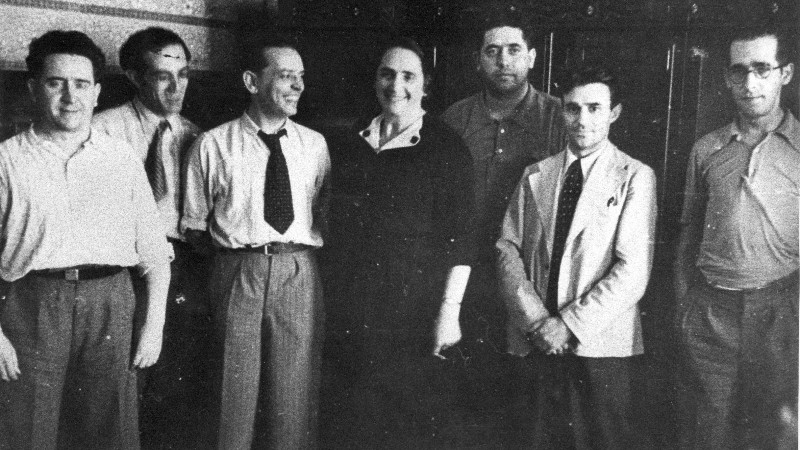 Soldiers needed to be accommodated in a residence which would serve them as a starting point for their operations. A cellar/oil pressing building was restored and habituated as a living area for the soldiers including a dining room in one of the premises in the building, the installation of “Portland” flooring in some of the living areas and the construction of a chimney that is currently in the building. According to a report carried out by “Arma de Aviación”, the barracks had a sleeping area holding 40 beds, a Sargent Department, a Corporal Department, an office, kitchen, pantry, toilet, lobby and hall. The current owners of the building have preserved he kitchen area.

It is important to point that the last meeting of the political branch of the Communist Party in Spain during the war took part in this building on the night of the 6th of March 1939. The meeting was conducted by Palmiro Togliatti who was the highest representative of the Komintern liable to respond to the Spanish Government and the International Brigades.

When the aerodrome was abandoned, El Fondó continued with its daily routines and recovered the tranquillity of the olden days. Once the main function of the aerodrome was resumed all installations were dismantled. The electrical infrastructure, telephone line, containers of the oil press and petrol buildings which were partially buried were seized by Franco’s Recovery Board.

It took 50 years until electricity and phone services were restored in El Fondó. Electricity was installed in 1962, much earlier that telephone services were, the latest being available in 1987 coinciding with a visit to town of Adolfo Suárez. According to neighbours, Suarez was invited to a house in El Fondó were he had to make use of a telephone, being this the main reason for the installation of the telephone line. In this way, this private phone was the main telephone service for the residents in the parish. In 1966, and adding to the telephone services, a new school and a residence for the teacher were also built. The Provincial Committee of School Buildings of the Education Ministry developed the projects thanks to land donations made by the Albert Herrero brothers and their uncle Francisco Herrero Verdú.

The school allowed that many children in El Fondó could receive basic education in a pure rural environment.

The Chapel in the parish is dedicated to Santa Catalina and was completely refurbished in 1925 and on the 14th of March 1926 was formally opened. The neighbours are responsible for its maintenance and care.